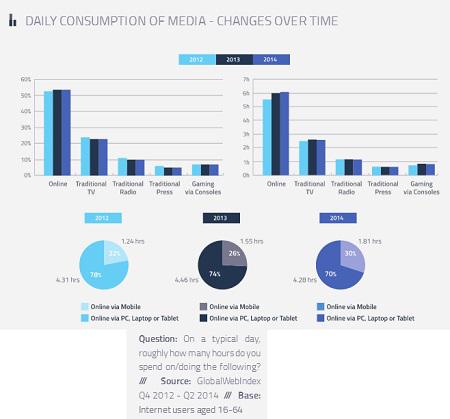 The Global Trend of Media Consumption through Internet in 2014

One of the not so shocking studies from GlobalWebIndex concluded that only handful countries (such as – UK, Germany, Australia, Netherlands, Poland and France) have traditional marketing channels leading (marginally) over digital marketing trends.

On an average, a global internet user spends over 6 hours on online media on daily basis in 2014, compared to 5 and a half hours in 2012. Developing economies such as Thailand, Malaysia and Brazil are one of the most digitally inclined across the world having average internet user hours of 8+ on daily basis. That means when the user wants to buy something, they do not knock the door of the shop next door but they search on internet more often than not.

More findings of this report are:

What we do at LetsNurture?

Share your thoughts and ideas with us by writing us at info@letsnurture.com.