PokemonGo game has been a rage amongst the youth. It’s not something that became popular overnight. Pokemon characters are so cute that they are liked ever since their first video game was released in 1996. They have been used in cartoon TV series, movies, card games and lot more.

Since then many graphic artists have tried different things with these Pokemons. Riding on the wave of Pokemon mania, LetsNurture’s creative designer Jignesh Rudani sketched out a superhero collection of Pikachu – the most loved character amongst all Pokemons.

Speaking on this Jignesh Rudani said, “I was just randomly surfing batman character in my leisure time when this idea struck my mind to design a ‘Batchu’ – a Pikachu wearing Batman suit. As usual, later I showed this to my colleagues and Ketan Sir, who appreciated me for creativity and encouraged to design more superhero suited Pikachu.”

He has designed 10 superheroes namely Batchu (Batman), Pika-Falachu (Flash), Ironchu (Ironman), Spikachu (Spiderman), Pikapool (DeadPool), Thorka (Thor), Captain-Go (Captain America), Hulk-Go (Hulk), Wolverachu (Wolverine) and Superka (Superman). While designing these, he believes that it was each character’s inspiration that made him give best of his creativity in the next Super-Pikachu.

Ketan Raval, CEO of Let’s Nurture quoted, “In order to enhance the excitement of chasing different Pokemons in the game PokemonGo, we tried to connect the International Comic Superheros with one of the character of the game. If we get a positive response from the audience , we are planning to implement these character into a new game.” 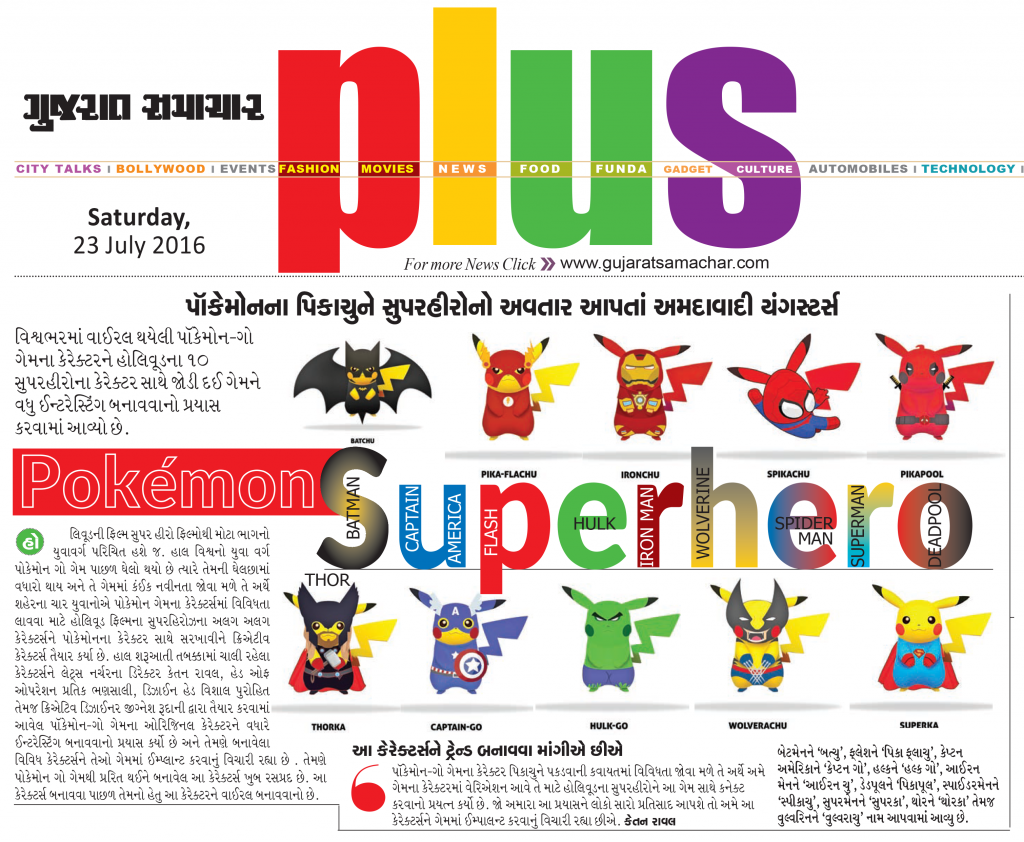 This creative effort of our also got mentioned in Gujarat’s leading daily newspaper Gujarat Samachar Plus on the very front page.

Any website at the basic layer is pure HTML – tags and styling. When internet started a few decades ago, HTML was only text. Gradually, it was possible to add …

END_OF_DOCUMENT_TOKEN_TO_BE_REPLACED

First of all what is Responsive Website Design? When you access internet from Mobile devices or tablets you might have noticed that few websites takes too much time to load …

END_OF_DOCUMENT_TOKEN_TO_BE_REPLACED

Mobile App Development To Nurture The Future of Technology

By 2020, mobile apps are forecast to generate around 189 billion U.S. dollars in revenues. – Statista Mobile is the future! Nope, mobile is now present at our IT hub, …