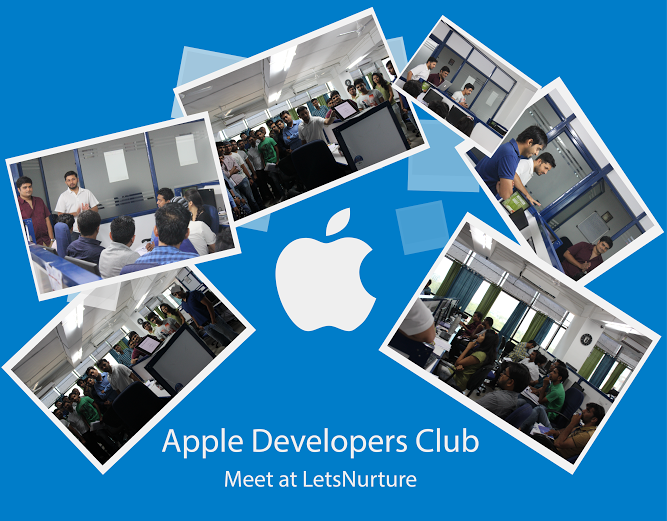 About the Apple Developers Club

It was first of its kind event in Ahmedabad when iOS developers across the city gathered to learn and discuss emerging trends and ongoing developments in iOS technology. The event was a great help for the iOS developers community to strengthen their knowledge and amplify their network.

The event was organised with the joint collaboration of LetsNurture and MobileFirst. Being the first meet of ADC, there was quite a curiosity among the members and the invitees regarding the unfolding sessions.

After the some brief introduction about the club, the members were apprised about the mission and vision of the club.

The first session was taken by Mr. Rahul Chandnani, an iOS Consultant where he went on to gave insights on UI Stackview, Auto layout best practices and Xcode Constraints. His presentation on Injection for Xcode was very much applauded by the participants. Many believed that it was much need of the hour and they hope to implement the suggestions in their upcoming projects.

Next, was a short session on Boosting Productivity on Mac. It relayed some quick tips about the use of Mac in order to speed up your work and ease of your workload. In this session, many of the participants also shared their own tech tips how they boost their productivity on Mac.

As Apple introduced Swift, their new programming language, most probably wondered how easily one can integrate it with existing Objective-C libraries that are available via CocoaPods. To ease of this problem Mr. Arpan Desai, Sr. iOS Consultant took this opportunity and gave varied insights about the Swift pod. His session extended to topics like Cocoapods, create your own pod, Swift pod in Objective-C project & Objective-C pod in Swift project.

After a Question & Answer session, the meet was concluded. Members were highly spirited and that reflected in their active participation in the first club meet. All the speakers and organisers were thanked for their commendable efforts in bringing the Apple Developer Community together.

With a promise to meet again, everyone bid adieu and once again thanked LetsNurture & MobileFirst for their endeavour to hold such a meet that helped everyone to strengthen themselves as iOS developers.

END_OF_DOCUMENT_TOKEN_TO_BE_REPLACED

It was long apple has kept itself aways from this kind of search based revenue model by advertisement but emerging times need new strategies to increase inflows. Apple is seeking …

END_OF_DOCUMENT_TOKEN_TO_BE_REPLACED

Products Expected from Apple in 2016

No doubt, Apple is the most loved and trusted brand in the consumer technology sector, it has earned this value by making great customer oriented products with a niche of …

END_OF_DOCUMENT_TOKEN_TO_BE_REPLACED

At last year’s Worldwide Developers Conference, Apple unveiled a new programming language called Swift. This year it announced that this very program will be available in open source with a new …

END_OF_DOCUMENT_TOKEN_TO_BE_REPLACED

At last Apple revealed its music streaming service called “Apple Music” at WWDC. With iTunes and iPod the company already has a connection with the music; however this announcement sounds …

END_OF_DOCUMENT_TOKEN_TO_BE_REPLACED

With the launch of iPhone 5S, Apple has integrated one of their significantly critical patents to provide additional security to the iPhone users. The iPhone 5S, is equipped with Touch …

END_OF_DOCUMENT_TOKEN_TO_BE_REPLACED

After the iBeacon at WWDC 2013, another feature to cover the extended network to automated lifestyle, Apple introduced the HomeKit API – at this year’s developers’ conference. If iBeacon is …

END_OF_DOCUMENT_TOKEN_TO_BE_REPLACED

Apple thrives on customer base addicted to their Premium Features and loses significant number with their rigidity. But this year at their World Wide Developer Conference, the No 2 ranked …

END_OF_DOCUMENT_TOKEN_TO_BE_REPLACED

Apple Push Notification service (APNs) is a simple, efficient and high capacity transport service that is at the core of the push notifications feature. The service helps in transmitting messages …

END_OF_DOCUMENT_TOKEN_TO_BE_REPLACED

Does Your Smartphone Eat Ice-Cream Sandwich?

What will you think if I say that I made a high utility application for android phones using Ice-cream Sandwich? Or if I say that my friend just bought a …