There has been a little big new development in twitter which will change the way we tweet. If you have not noticed it yet, then let us tell you. Now you can add new lines or line breaks to your tweets. Now whether this is the best or worst thing that Twitter might have done is yet to be seen.

Now this allows a lot of great options available to us. You can tweet about conversations now, or write a haiku maybe. But what you can also do is tweet utter nonsense. You can insert line breaks after every letter and probably cover someone’s entire feed. This kind of thing is juvenile and idiotic which is why more people (Typically the kind that says YOLO and SWAG a lot) will be drawn to do it. 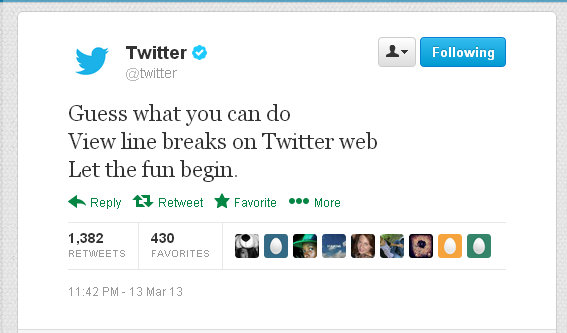 The next break in Social Media Marketing

So as you might typically understand this can both enhance and ruin your experience. A thing to note here is that the line breaks only work on the twitter website and the twitter mobile app. It does not work when you embed tweets, nor does it work on Tweetdeck or other clients. 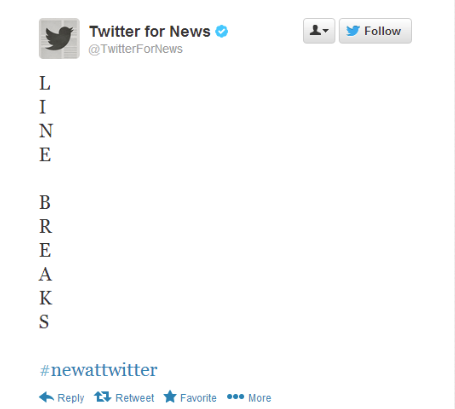 This however opens up new discussions. Typically from the point of view of developers, this might mean that they might have to parse tweets differently now. What this will allow Social Media Marketing campaigners to do is to engage their peers better with say polls.

It is a great thing and now the length of lines are now shortened and readability of tweets has improved. The implementation of these line breaks is still under scrutiny and maybe some modification might happen later. Till then maintain hope that people do not experiment too much with twitter line breaks.

Let us know your thoughts and follow us on Twitter at @LetsNurture for more such interesting news.

Twitter has came up with its Advance search, Now you can access Twitter Advance search weather you login or without login. You have rights to perform detailed queries on endless …

END_OF_DOCUMENT_TOKEN_TO_BE_REPLACED

Twitter is on a roll to invest $10 million for next five years to analyze every tweet tweeted since 2006. Massachusetts Institute of Technology’s (MIT) Media Lab scientists will be …

END_OF_DOCUMENT_TOKEN_TO_BE_REPLACED

Twitter- one of the social media giants that regularly comes up with something new, both for the people who use twitter, also known as tweeple and the media/advertisers. The New …

END_OF_DOCUMENT_TOKEN_TO_BE_REPLACED

I am an avid fan of twitter and I loved to go with twitter every day. Here is news for twitter lover. If you want to go back and dig …

END_OF_DOCUMENT_TOKEN_TO_BE_REPLACED

Innovation is another name for Twitter. Over time we see it innovating something new all the time. Like allowing mobile users to tweet from SMS while Sandy ravaged America. Simple …

END_OF_DOCUMENT_TOKEN_TO_BE_REPLACED

Social sharing is expanding; UX/UI designers are so much busy into intensifying this social sharing over the internet. There is no rocket science, Social media sites are playing with human …

END_OF_DOCUMENT_TOKEN_TO_BE_REPLACED

The Android team of LetsNurture will be the object of fawning and adulation as the company’s Android Application for Tweet Analysis reaches new heights with 1000+ installations. And why not …