Mobile application development has changed the face of human life. The penetration of smart phones will be reaching above 75% by the end of 2014 in the USA. And the dominance of the Apple and Android continues to grow stronger as per the reports from new data. In another report for Q2 for 2014, the smart phones penetration has increased by 4% reaching 71.6% with 173M US residents. However, the percentage share for the device manufacturers i.e. Apple and Samsung has noticed a little marginal drift. 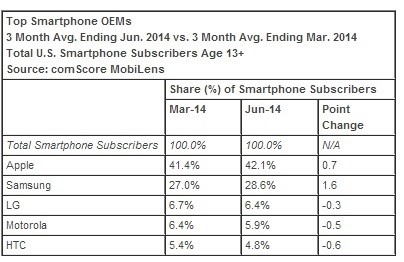 As we draw the comparisons for the manufacturers, Apple leads the way with over 42% market share and Samsung strongly trials at 28.6%. However, this also confirms decrease in Android market share by 0.7% that is gained by Apple powered iOS platform. With new Chinese entrants booming the Asian markets are still not creating any significant impact in the US market and LG, Moto and HTC remains the remaining lot in the top 5.

The platform-wide competition will take unexpected twists as we head our way to Q4 with iOS8 and Android L 5.0 are expected to be launched. As Apple has surprisingly taken very small but significant lead by 0.7% in Q2 with an aging iPhone 5s – the future of Apple and iOS apps looks brighter with iPhone 6 just a month away. 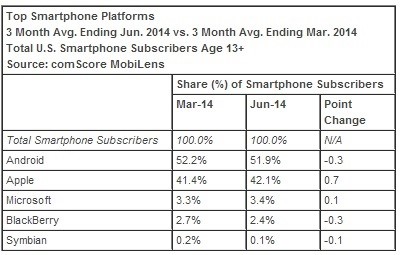 While we compare for the apps, Facebook, YouTube and Google are still the most popular apps amongst US smart phone users. As Facebook leads healthily with above 73% of smart phones using it, but the larger surprise is company’s recent forced separation of the Messenger app claiming 10th spot with close to 27% smart phones running the app. Google seems to have a long way to come as Google+ trails on the 15th spot with just 20.3% of the smart phone users running the app. 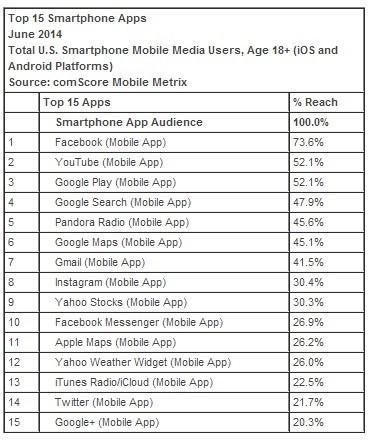 Beacons Will Now Guide the Blind to Walk through London Subways!

Beacon technology has emerged as the most innovative one in the recent past. The pebble shaped small devices emits a Bluetooth signal and can be connected to your smartphone through …

END_OF_DOCUMENT_TOKEN_TO_BE_REPLACED

Microsoft Band Finally Arrives in the Online Stores of USA at Just $200!

Microsoft band is now available in the online stores in USA like Amazon, Best Buy and Target at a mere price of $199.99. The giant made its debut by showcasing …

END_OF_DOCUMENT_TOKEN_TO_BE_REPLACED

Get Ready to Turn Your Bike into a Smart Bike with the Devices Launched at CES 2015!

As expected, the techno freaks at CES 2015 displayed the utmost innovative concepts to grab the attention of audience. Right from the Beer Brewing Robot to Self-driving car from Mercedes, …

END_OF_DOCUMENT_TOKEN_TO_BE_REPLACED

At present day, to remain competitive businesses must identify the niche areas to increase their reach to their clients and customers. Therefore, you may already have come up with a …